These are the world’s healthiest nations

Spain has many attractions – delicious cuisine, a balmy climate, sublime music and a fascinating history. And now it can add another accolade: it has just been named the healthiest country in the world.

Bloomberg has crunched numbers from the UN, World Bank and World Health Organization, scoring 169 nations on a range of factors from life expectancy to obesity, tobacco use, air quality and access to clean water. 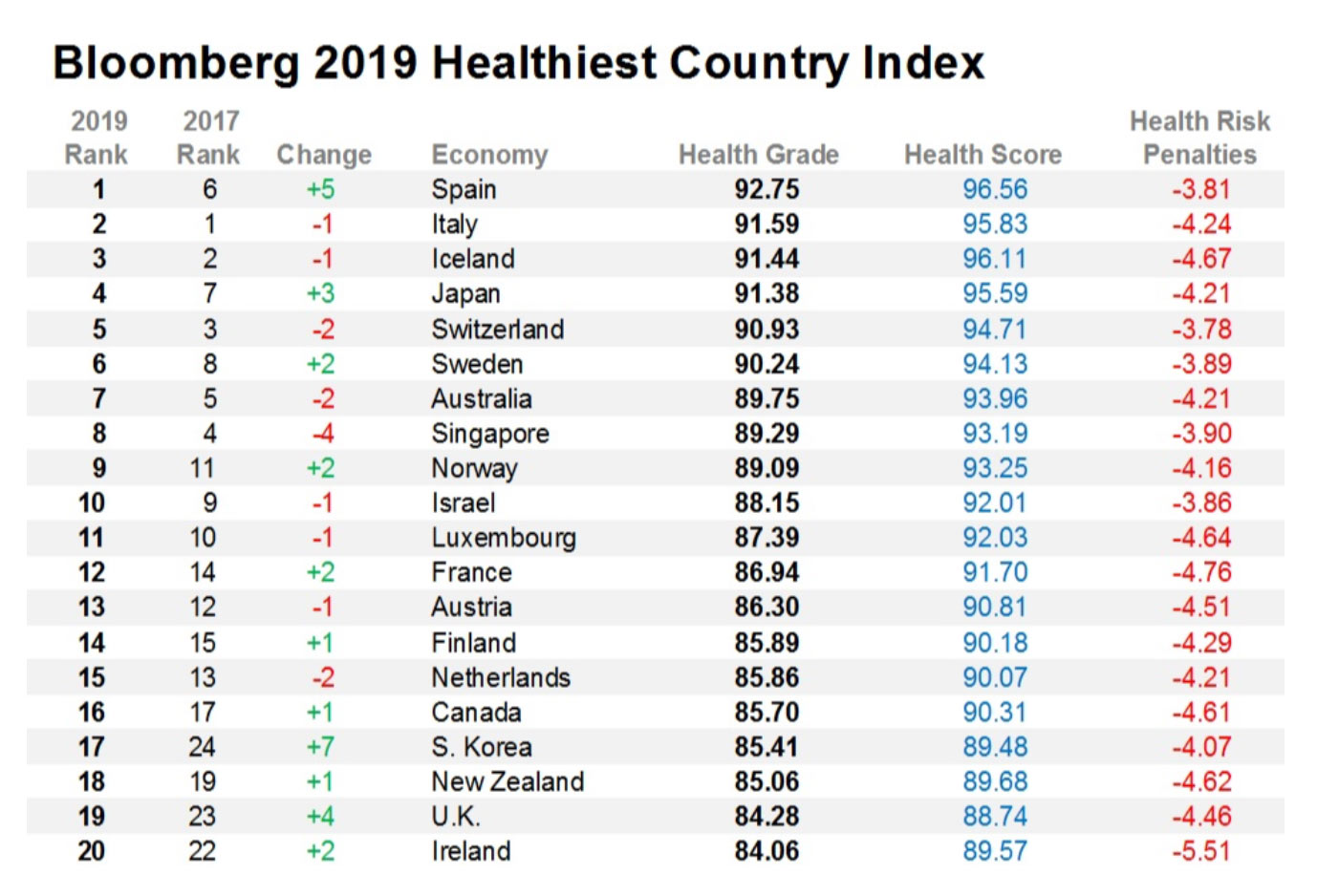 The results show Spain has risen up the rankings from 6th place the previous year, pushing Italy down into second place. Iceland, Japan and Switzerland follow closely behind, in a list that demonstrates the correlation between health and wealth. High income nations in Europe and the Pacific rim dominate the top of the table. In contrast, 17 of the 20 lowest-ranked nations are in sub-Saharan Africa, along with Yemen, Afghanistan and Haiti.

But although income is a strong indicator, a glance at the list shows there are clearly other factors at play. The US, where life expectancy has been droppingpartly as a result of opioid overdoses and suicides, is ranked just 35th on the list. That’s five places lower than significantly poorer Cuba, with its long history of investment in publicly funded healthcare and emphasis on preventive medicine.

When it comes to healthcare systems, the most important factor appears to be how, rather than how much, money is spent. Spain is singled out for a notable decline in cardiovascular diseases and deaths from cancer over the past decade, partly as a result of effective public health policies based on screening and prevention. Its healthcare system is predominantly publicly funded by taxes, and operates on principles of universality, free access and financial fairness. Essentially, everyone is entitled to the same level of care no matter how much money they have. Its primary care is particularly praised, with specialized family doctors acting as the gatekeepers to the health system.

But its healthcare spending per capita is actually below the OECD average, and just one-third of the US.

Obesity is also linked to a sedentary lifestyle, and countries such as Switzerland and Sweden with high rates of participation in sport and other physical activities rank high on the list.

Perhaps even Spain’s traditional siesta plays a part – with some studiessuggesting that a nap of just under half an hour can have significant health benefits.

By 2040, it is predicted that Spain will overtake Japan and boast the longest life expectancy in the world, with its inhabitants on average reaching nearly 86 years old. By then the rest of the world will be catching up, with China’s life expectancy expected to surpass the US.

In the meantime, you have the perfect excuse for an afternoon nap before a tasty paella dinner: ¡viva España!

Guide to Spanish Residency Permit, Visa Rules and Application FormThis is how long everyday plastic items last in the ocean

How not to get hacked during Holidays

What is Fiber Optics?

We use cookies to ensure that we give you the best experience on our website. If you continue to use this site we will assume that you are happy with it.OkNoPrivacy policy
Revoke cookies